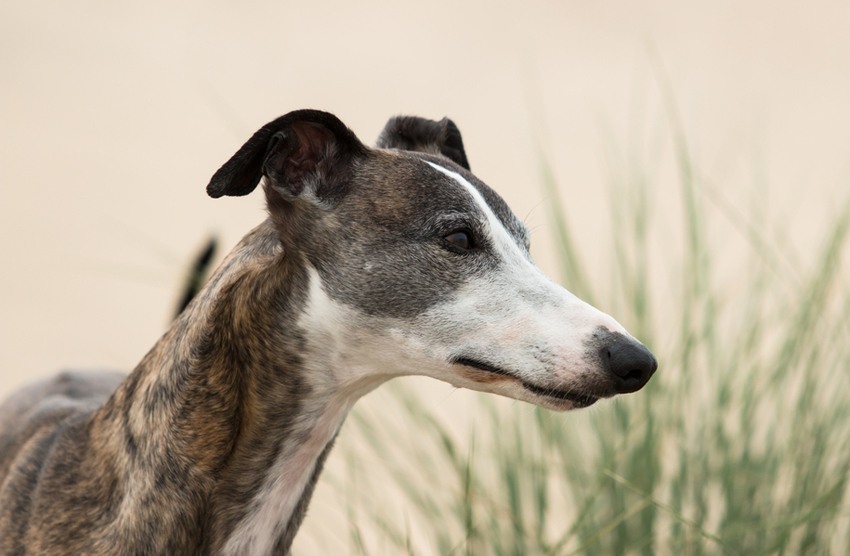 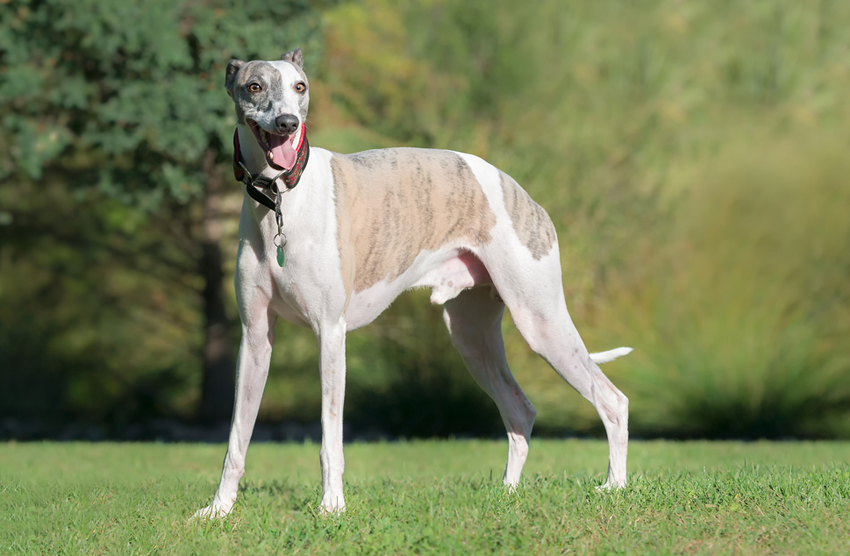 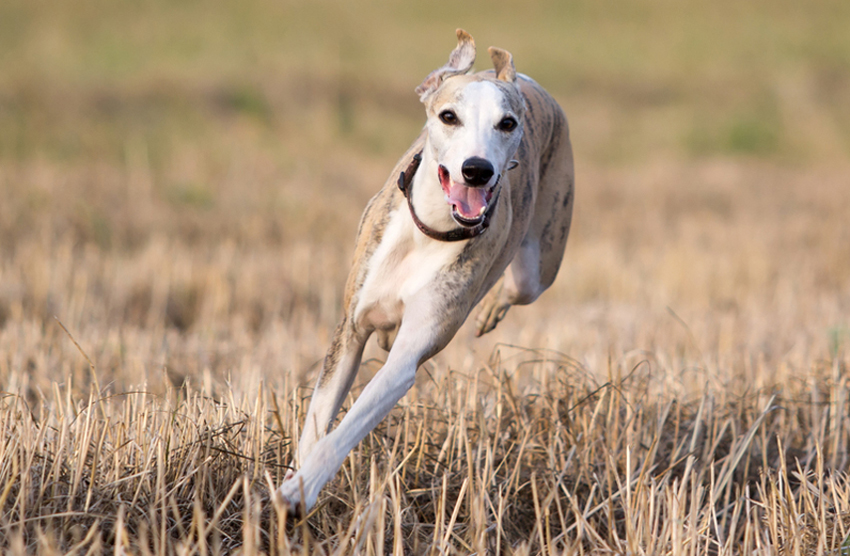 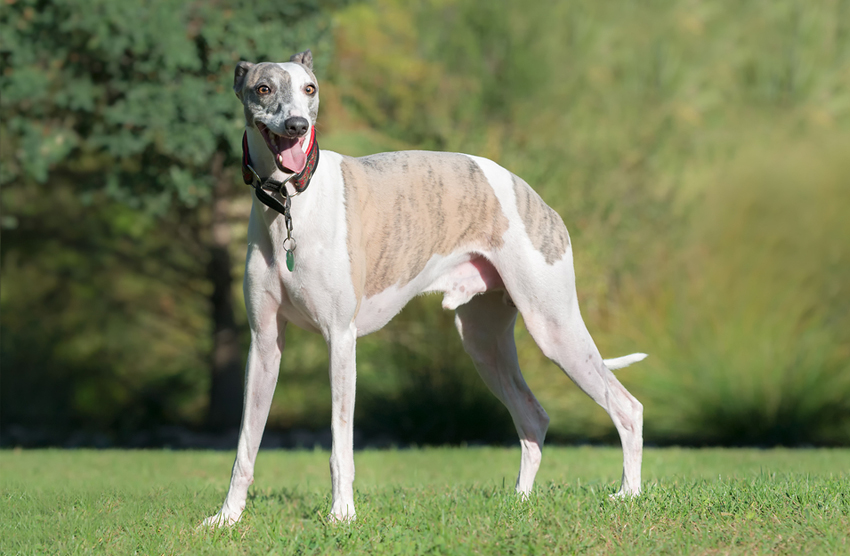 Looking for a
Whippet?

If you are looking to buy or adopt a Whippet, you can view our:

Whippet Puppies for Sale in Scotland

If you’re looking for a Whippet puppy in Scotland, type in your postcode and let Pets You Love alert you to any pups for sale or rescue in your area.

The Whippet is a friendly, loving medium sized dog that is easy to groom and relatively easy to train. As an avid chaser of rabbits and other small game, the Whippet was once the poacher’s best friend!

The Whippet actually descended from the larger, taller and lankier Greyhound and was originally classed as a small Greyhound. Those that were considered to be too small to be hunting dogs were given a new sporting role in Whippet Racing - and boy, do they run fast! Whippets in full flight have been recorded running at speeds of 35 miles per hour!

Nowadays, the Whippet makes an excellent family pet that excels in all doggy sports including agility and obedience. Potential owners should not be put off by thinking that the Whippet needs an incredible amount of exercise; an hour a day would be sufficient and he also enjoys being a bit of a couch potato in the home, so excessive exercise is not something that this dog demands for fitness nor emotional stability.

If you’re looking for a Whippet puppy in Scotland, you’ll want to know more about his personality. Well, the sleek and elegant Whippet has always been popular as a racing and hunting dog, but nowadays, he is happy to be in the heart of the family home; this dog truly loves his humans.

The Whippet is gentle by nature and as skinny and bony as he is, he loves to cuddle up and to be cuddled. He is a highly adaptable breed - both as an apartment-dog or as a country-dweller.

Generally a quiet dog, the Whippet can sometimes be a bit nervy and shy, but as long as he is well-socialised from an early age and introduced to lots of new people and new surroundings then he will develop into a confident adult. He can be wary around strangers and will bark if he feels threatened in any way.

The Whippet is a smart and eager to please his owner and this makes training him a pleasure. That said, training the Whippet should start early with lots of continuity and lots of praise! He’s not the fastest of learners, so owners need time and patience to train this breed, using repetition of commands and always treat him kindly. He will reward you for this tenfold by being a loving and loyal pet!

The Whippet is very sensitive to his owner’s tone voice, and would never respond well to harsh treatment of any kind. Lots of loud noise would also make him very nervous.

The Whippet would also prefer to spend most of his time with his owner and doesn’t like to spend much time on his own or separation-anxiety can set in.

Whippets can make a good choice of dog for first-time owners and with the right amount of exercise and positive training he will make a great companion.

The Whippet can also be trained to take part in agility and obedience trials which he will enjoy and excel in!

Description of the Whippet

The Whippet is a lean and elegant dog, but he’s also powerful and athletic and capable of running super-fast! Whippet-type dogs date back to the 1600s, with them recorded as fantastic hunters and great sight-hounds, however, the Whippet became most popular in the 1900s in the UK, especially in the North of England where they were bred to race.

The breed is thought to have been developed by crossing several sporting breeds including the Greyhound.

The Whippet is graceful with his long lean body and lithe limbs. He has a long neck, while shoulders are well laid back to show off the dog’s deep chest and well-muscled broad and long back. Front legs are straight, long and lean, while hindquarters are strong with well muscled thighs.

His sleek head tapers nicely to his muzzle. The Whippet’s nose is generally black, however this can correlate to the colour of a dog’s coat, i.e. a whippet with a blue coat could have a bluish nose, while a whippet with a cream coat may have a liver-coloured nose. Meanwhile, parti-coloured coat and white coated dogs can have what’s known as a butterfly nose – with some pink pigmentation.

The Whippet has oval eyes and his ears are small and fine. This fine specimen of a dog stands at a height of between 43 to 52cm, while he weighs in at around 9 to 19 kg!

If you’re looking for a Whippet puppy for sale in Scotland, it’s worth knowing that this breed can live between 12-14 years. It’s a fair commitment to a dog that will become a well-loved member of the family.

The Whippet is an athletic dog that needs at least an hour’s exercise per day. This breed of dog will happily snuggle down for naps the home but once outside, he just needs to run! Owners must take care around small animals because the Whippet’s inherent prey-drive will see him chase squirrels and rabbits to the ends of the earth and once on a scent, the Whippet’s recall leaves a lot to be desired.

Recall is a particular training bug-bear for Whippet owners and is something that needs to be taught from puppyhood and practised regularly.

Those considering buying a Whippet puppy in Scotland should know that grooming is pretty low-maintenance with one of these dogs and a weekly-brush is all it takes to keep this dog looking good. That said, a daily brush or even twice weekly brush with a soft brush is probably the best bet to keeping an eye on this dog’s skin, which can be quite sensitive and to check for any wounds or insect-bites, which could become infected.

The Whippet isn’t a fussy eater and he’s best kept on two meals per day of good quality wet or dry food. Owners should keep in mind that treats should make up only 20% of their dog’s diet. The Whippet must also have access to drinking water at all times.

Cost of Keeping a Whippet

Those looking for a Whippet puppy in Scotland, should know that the average price for a well-bred dog ranges between £300 to £500!

Owners should do their homework before buying and always ask to see the puppy with its mother and in its place of birth before entering into a contract to buy a Whippet puppy.

It will costs on average between around £40 to £60 per month to keep a sweet natured Whippet in your life. This includes food, pet insurance, grooming, vaccinations and neutering.

Looking for a Whippet?

If you are looking to buy or adopt a Whippet, you can view our:
for sale section
for adoption section
for stud section

Dog Breeds
If you’re looking for a dog for sale in Scotland look no further. Simply, read more ...

Dog Breeds
If you’re looking for a dog for sale in Scotland look no further. Simply, read more ...